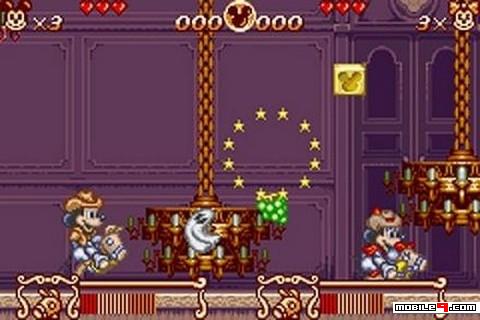 The Great Circus Mystery Starring Mickey & Minnie, later titled Disney's Magical Quest 2 Starring Mickey & Minnie, was released for the Super Nintendo Entertainment System and Sega Genesis/Mega Drive in 1994 and for the Game Boy Advance in 2003. The game features Mickey Mouse and Minnie Mouse trying to figure out why everyone in the circus has disappeared, and includes four different types of outfits and six different levels. While the SNES and Genesis/Mega Drive versions were practically identical, the GBA re-release in 2003 included some new features. As its predecessor, it received praise for its graphics and outfit system and was criticized for not being challenging enough and short. Mickey and Minnie Mouse travel by bus to the circus at the edge of town where they are going to spend the day. When the bus arrives, a little late, Goofy appears and tells Mickey and Minnie that everyone in the circus tents has disappeared. Mickey and Minnie are surprised by Goofy's claim, but choose to go to the circus and see it with their own eyes. At the circus they realize that their friends Pluto and Donald are gone. Mickey and Minnie must now find out what is going on at the circus.

SEGA SLOTS – FREE VEGAS STYLE SLOTS GAME! SEGA Slots give you a chance to WIN glorious JACKPOTS in some of the fastest, most addictive

After a mysterious storm sweeps your family from the sea, it’s up to you to find them and uncover the mystery behind the forces that

Purchase this PS one® Classic and play it on both your PS3™ and PSP® (PlayStation®Portable) systems! Take the role of Justin, a young boy obsessed